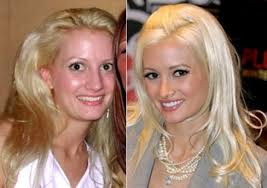 Holly Madison is a New York Times best-selling author, model, showgirl, and television personality. She is best known for being one of Hugh Hefner’s three girlfriends and for her appearance on the E! hit reality television show “The Girls Next Door”. She also had her own reality series, Holly’s World. She has appeared as a guest-star in several television shows such as CSI: Crime Scene Investigation, Celebrity Family Feud, Keeping Up with the Kardashians, Curb Your Enthusiasm, The Ellen DeGeneres Show, Entourage, General Hospital and in films such as Scary Movie 4 and The House Bunny. Madison released her first book and memoir, “Down the Rabbit Hole: Curious Adventures and Cautionary Tales of a Former Playboy Bunny”, in July 2015, followed by her second book, “The Vegas Diaries: Romance, Rolling the Dice and the Road to Reinvention” in May 2016. Born Hollin Sue Cullen on December 23, 1979 in Astoria, Oregon, to parents Patsy and Steve Cullen, she grew up in Alaska and Oregon. Madison studied theatre and psychology at Portland State University for two years and enrolled herself into Loyola Marymount University in Los Angeles in 1999. She has two children with Pasquale Rotella, whom she was married to from 2013 to 2019.

Once I decide I want to do something, I just work really hard and I do it, and I just know it’s going to work. I think really positively.

Truthfully, being pregnant is changing me as a person. Each day is part of this amazing journey that has completely shifted the focus of my life and made me reevaluate my personal and professional goals.

I’d rather be overweight and curvy than super thin with no curves. I’m proud of my body.

You know, ‘Peepshow,’ in retrospect that seems like a good fit for me, but in the beginning, I’m sure you remember, nobody was sure if the show was going to last. Everybody was like, ‘What are you doing? You can’t sing, and you can’t dance. What are you doing in this show?’

I have cellulite – and had it even when I was at my absolute thinnest. I’m never not going to have cellulite. People need to just accept that it’s there and maybe dress accordingly or use body makeup to cope with it.