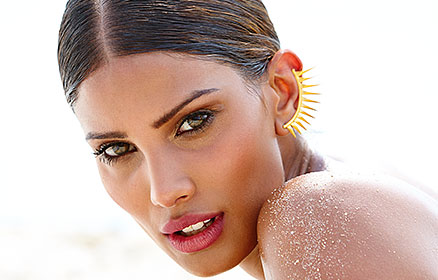 Sahar Biniaz is an Iranian-Canadian actress, model and beauty pageant titleholder who was crowned Miss Universe Canada 2012. She played Leila in the 2012 film Ambrosia and had a recurring role as Kali in the hit TV show Sanctuary. She has also appeared as a guest-star in several television series such as Blue Mountain State, and Smallville. Born on November 17, 1986 in India, she was raised in India, Iran, and Canada. She studied at the University of British Columbia, The Actors Foundry & the Lyric school of Acting. She won the Miss Universe Canada title in 2012, and was supposed to represent Canada in the Miss Universe 2012 competition. Unfortunately, Sahar was unable to make it to the Miss Universe 2012 competition due to a foot injury and 1st Runner Up, Adwoa Yamoah went to Las Vegas to represent Canada in her place. From 2015 to 2016, Biniaz was engaged to swimmer Ryk Neethling.