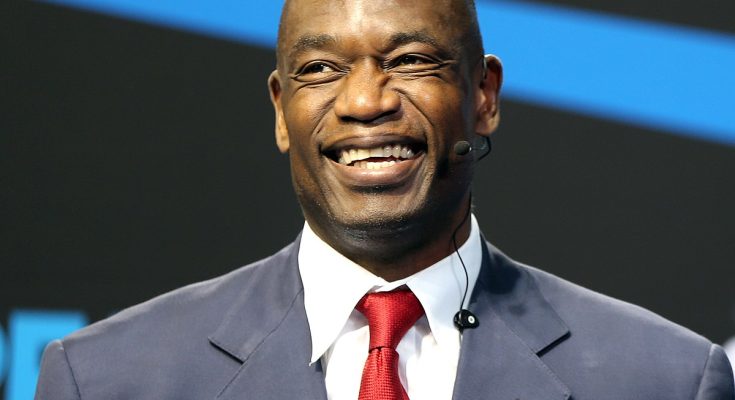 Dikembe Mutombo’s body measurements are all here! Check out his height, weight, shoe size and more!

Congolese center who was an 8-time NBA All-Star and 4-time Defensive Player of the Year during an 18-year career that spanned from 1991 to 2009. He played with six different teams, most notably the Denver Nuggets, Atlanta Hawks, and Houston Rockets.

He was a star at Georgetown University, where he first became known for his shot-blocking; he was then selected 4th overall by the Denver Nuggets in the 1991 NBA Draft.

He led the NBA in rebounds in back-to-back seasons from 2000 to 2001 with the Atlanta Hawks and led the league in blocks three straight years from 1994 to 1996 with the Nuggets.

He raised six children, two biological and four adopted, with his wife Rose.

He finished his career second all-time in shots blocked, behind only the great Hakeem Olajuwon.

I was not very strong growing up, and my uncle used to look at me, like, ‘This kid is not growing up, he is growing tall but he can be broken like a banana.’ The banana in Congo is called ‘Dikembe.’ So my uncle start calling me, ‘Dikembe, Dikembe, look at you Dikembe, you cannot even stand up.’ It took a long time for me to walk.

It’s easy to be a spokesman and ambassador for a great organization like the NBA. I thank Commissioner David Stern for putting that trust in me to serve the NBA around the globe.

I’ve always felt obligated to help those less fortunate than me. It’s an obligation that anyone who has a chance to be in the NBA should feel and act upon.

I am not in politics. ‘President Mutombo?’ No, no, no. There has never been a politician in my family, and I am not going to try to be the first one.

I’ve always had a passion for giving back. It’s a family tradition that comes from my devout parents. They were always giving back and serving the community. So when I became fortunate enough and blessed to play the game of basketball, I was also fortunate enough to follow in my parents’ footsteps and give back like the way they did.